The Hotel El Paso is a theme hotel within the PortAventura World complex that recreates a traditional colonial-style Mexican hacienda....

The Hotel Gold River is a 4-star themed establishment located in Salou, within the tourist complex of PortAventura World. Inspired by the... 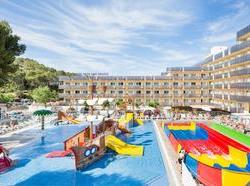 Hotel located on the beachfront, in the area of ​​"Cap Salou", 2.5 km from Salou (bus line) and 6 km. of Port Aventura World. Completely...

The Oasis Park Hotel is located in the center of Salou. It has been refurbished in 2016 and all your rooms have balcony, bathroom with...

The Hotel PortAventura is a 4-star Mediterranean-style accommodation. This theme hotel recreates a small fisherman village, with its...

Hotel Jaime I is located in central Salou, 5 minutes’ walk from Levante Beach. It offers 2 outdoor pools, a squash court and rooms with a...

Located in the centre of Salou just 250 meters from the Capellans Beach and 3 km from Port Aventura theme park. Ideal for families and...

The Hotel Caribe PortAventura is a theme hotel that recreates the charm of the Caribbean and is surrounded by palm trees and a white sand... 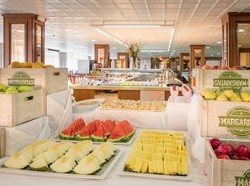 In H-TOP Molinos Park you will enjoy a good location in Salou, next to the sea, a few minutes from Cala Font Beach and in the vicinity of...

This attractive hotel is set 984 feet from PortAventura Theme Park. It offers an indoor and outdoor pool and a gym with sauna, hot tub... 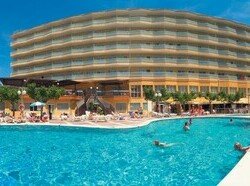 The hotel is located a 10-minute walk from the beach, in central Salou, and just 2.5 km from Port Aventura Theme Park. It features 2...

Hotel Best Da Vinci Royal is set in central Salou, 328 feet from the beach. The hotel features an outdoor pool for adults and children....

The Colorado Creek hotel is a Far West-themed accommodation. You will be able to make the most of your days in the park thanks to the... 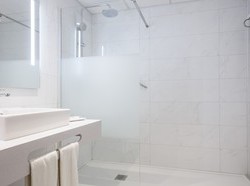 The H10 Salauris Palace is close to the beach, PortAventura & Ferrari Land and several golf courses. This magnificent hotel offers a wide... 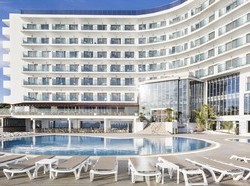 Hotel 100% renovated in 2019 consisting of the Best Negresco and Best Negresco II buildings, located on the seafront and next to Playa...

Salou, found in Tarragona on Costa Dorada, is a beautiful city dedicated to tourism. Oriented primarily towards families, it is a good option for vacationing: and it recently became more popular thanks to the construction of the Universal Studios Park in Port Aventura, a magnet of leisure tourism.

The region of Salou contains eight beaches and various coves, some of which were awarded EUs Blue Flag. The city's beach culture gained popularity in 1863 when the first beach houses were installed on the popular Ponent coast. Possibly one of the most visited is the beach of Llevant, which can found next to the Nautical Club of Salou, close to the center of the city.

The city contains many attractions, which you can get to know with the help of the little trains that the community makes available for visitors to get to know the municipality in a different manner. There are also many excursions to be made into the city's surroundings. Try to visit the weekly artisan's markets or shop in one of the many malls. The soft climate of the city invites for a stroll along the the well-known seaside path of Jaume I, or if you prefer a more cultural visit you should not miss the offerings of Torre Vella: this ancient fortification from 1530 has been remodeled into an important cultural center.

As far as nightlife goes, this is one of Salou's principal attractions: the city is famous for it, containing numerous pubs and discos that draw out all the night-owls. But there are also numerous ice-cream shops and cafés that stay open until late. If you enter the city on Murillo, Carles Buigas or an adjacent street, you will find yourself in the area known as slammers where you will find the majority of music bars, and discos that attract the younger tourist crowd.

In Salou we will have broken clouds, warm clothing is recommended.

Points of Interest in Salou

Are you reserving a hotel room in Salou and have no way to get there? Book your flight now with Destinia!

The most centrally located hotels in Salou with the best ratings are: Sercotel Blaumar , Apartamentos Indasol and Apartamentos Les Dàlies.

It depends on the category of the hotel. If you want to stay at a 4-star hotel in Salou, the average price per night is €31, while you will pay an average of €22 for a 3-star hotel, and in a more luxurious 5-star hotel, you"ll pay around €112.

If you're bringing a vehicle, we recommend that you book a hotel with parking in Salou, like Hotel H10 Salauris Palace, Hotel Ohtels Belvedere or Sercotel Blaumar .

The best hotels in Salou for adults only are Hotel H10 Delfín - Adults Only and Hotel Magnolia - Adults Only.

According to our clients, if you´re travelling with children, the best hotels in Salou are Hotel Ohtels Belvedere, Hotel Ohtels Vil-la Romana and Hotel H10 Salauris Palace.

If you want to save time, the hotels in Salou with express check-in and check-out are Apartamentos International II and Hotel Olympus Palace.

Some of the options for hotels with non-smoking rooms in Salou are Hotel H10 Salauris Palace, Hotel Ohtels Vil-la Romana and Hotel Ohtels Belvedere.

By using our own and third-party cookies, we are able to offer you the browsing experience you want, improve our service and provide you with the advertisements that best suit your preferences. If you agree, continue browsing. More information